The NIST rules require documentation that the EHR is capable of providing encryption/decryption of data. These third party tools meet that need in my opinion. --Tony - www.mi-squared.com 01:22, 4 March 2011 (UTC)

ICSA (Amit) says: Yes – SSL, and Windows EFS and/or TrueCrypt can be configured to meet the requirements in the test procedures. Basically we would run through the test procedure and verify that the software was configured accordingly, and when the product was listed on the CHPL (Certified Health Product List), we would list whatever additional 3rd party software was used to meet the requirements during testing. --Tony - www.mi-squared.com 06:53, 5 March 2011 (UTC)

Tests with ICSA on Friday indicate the need to add one more function to the document management model. This will be a enhancement to the SHA1 hash key model used to meet "Integrity tests". --Tony - www.mi-squared.com 20:19, 13 March 2011 (UTC)

We'll do this by adding a optional encryption/decryption prompt to the document upload/download module. We have chosen php_mcrypt as the library to use for this and TripleDES as the cypher. Future enhancements could add a pick list of availble FIPS 140-2 approved cyphers.

Example of screen to download AND encrypt a document

Example of upload with decrypt option 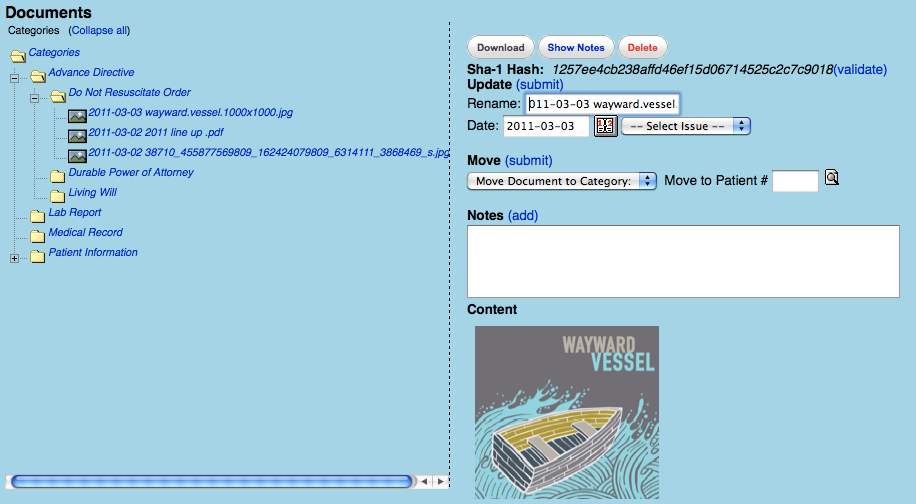 Validation that failed due to tampering